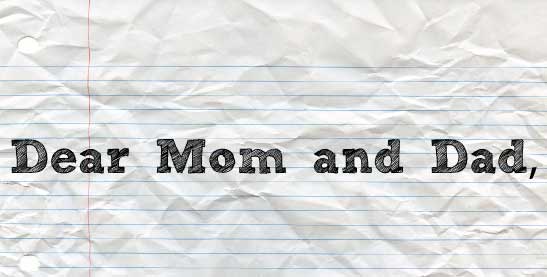 By the time I reached my junior year in high school, I was expected to know where my future was headed and what I wanted to do with my life. By that time, most high schoolers are expected to know if they want to go to college and where. Most parents hope their future leaders even pick college at all, and most athletes’ parents hope they’ve not only picked a college, but they pray they’ve been scouted, picked by a (big name) college and have a pretty decent scholarship offer on the horizon.

By junior year, athletes, if they’re any good, are mini celebrities who walk the proverbial red carpet every time they enter the school building. They get pushed into the world of sports super stardom from the time their stats hit a popular sports blog. There’s pressure, the school’s reputation to consider, the coach not to let down, mom or dad’s legacy to carry on.

And sometimes, parents get so caught up in it all, in the possibility that little Johnny or Suzy might go pro or be one of the greats. And when they’re a black kid, the pressure is even greater, there are other elements to consider. There’s the ‘hood factor, the notion of getting out, of climbing higher, to something different, and by different, I mean better.

When black boys and girls enter sports programs with their strong black bodies that are in ways different than their counterparts, superiority and dominance is often implied. They go on the field, and they act out the inherent greatness that many of them have no idea they even have. And they do this, many of them, because they’ve got parents and coaches and teams somewhere that they’d do well not to disappoint.

These athletes spend countless hours in gyms and on fields honing skills and refining bodies, day in, day out, leaving little time for much else. But, there is, much else. There is so much else. There is an entire world filled with things that high school athletes know so little about by the time they make it to college age.

When I finally trotted off to college, I wanted to try everything, but I couldn’t. And not only that, I didn’t not have the voice, nor the arena to express the fact that I even wanted to try everything. I was stifled. My parents, along with the rest of the adults in my family were stuck on one thing: college. So that’s what I did, college. I was home after a year.

What I’ve come to understand now is that parents have to pay attention to their children. When I was in high school, I was an average student but I was creative. I liked to write, I was artistic although I wasn’t an artist in the traditional sense. I could make beautiful things out of other things. I was funny, enjoyed food and was a little introverted although I could be extroverted in the right environment.

And my mom, she was raising me kind of by herself; she was my primary influence and a mostly conservative straight arrow. She did with me what she felt was the right thing to do. She followed a blueprint I guess.

A perfect example of this is Cordell Broadus, son of rapper/actor Calvin “Snoop Dogg” Broadus. Touted as one of the most sought after high school football players in the country, Broadus signed on with the UCLA Bruins to compete for starting Wide Receiver this season. Cordell, though a talented sportsman, opted to quit the team to pursue a career in film production instead.

We got an opportunity to witness Cordell’s athletic prowess in Snoop & Son, a documentary that originally aired on ESPN in January 2015. Undoubtedly, he was, is a beast on the field. His ball handling skills are flawless and by all accounts, he was one of the most sought after recruits in the Nation. But football, although he did it well, wasn’t his passion, so he left UCLA’s football program to pursue what is.

I know it’s hard for parents, especially parents that are raising children from inner cities. Everybody is trying to escape, to get out. Most times, the only way people can see to do that is through music or sports careers. In black communities, sports seem to get the major push because scholarship monies are attached. And the possibility of an NFL or NBA contract is appealing. Not to mention, everybody can eat (grandma, cousin, bestie, homie, etc.) and not have to look back at the ‘hood.

Those kinds of dreams are all fine but sometimes, in all of that dreaming, we forget about our superstars. We loose them in all of that dreaming, in all of that talent they have. We forget to ask them what else they want besides getting out of the “trap”. We forget to ask them things like: What would you do if you could not play football/basketball/golf/tennis/track/baseball? If you could be an entrepreneur tomorrow what kind of business would you build? Have you ever thought about acting? Cooking? Dancing? Astronomy? Designing airplanes? If I went downstairs and took my washing machine apart, could you put it back together without a manual? What would you “like” to do? What are you passionate about? Can you tell me what you love?

Often, those questions will be met with an “Ion’know” or an irritation inducing shoulder shrug. They may even give you a definitive answer only to change it later on. All of the preceding is okay. We are dealing with after all, children. They are prone to not know, to shoulder shrug, and to change their minds many times over.

As parents, we are simply here to guide and encourage. It’s not our job to tell them who to be and what to do with their future selves. It’s simply our duty to allow them to live fearlessly, to discover their real and true selves, to be comfortable doing so, to bring what is inside, out.

For every thing there needs to be and should be, balance. If parents love their children the way we profess to, we must allow them room to discover who they are. And in so doing give them the opportunity to try something new, to explore something they have never done before. If they don’t like it, fine, but if they do, support them in it. You’ll be surprised where it might lead.