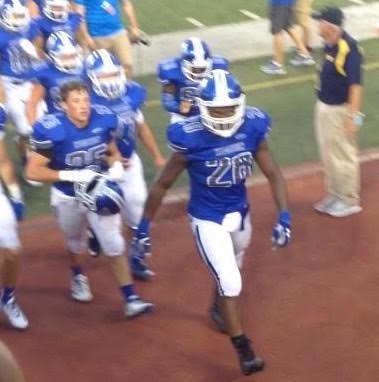 Ann Arbor, MI – August 26, 2016: Walled Lake Western is known for its offensive all-stars, Cody White (senior offensive prodigy committed to Michigan State) and Johnny Tracy (offensive senior who recently committed to Princeton). But it was another Jon whose name repeatedly rang out at last night’s Battle at the Big House, Jonathon Moffett (#28), who added an explosive power defense for Walled Lake Western during the team’s season opener at The University of Michigan.

With 9 tackles, 3 assists, 1 forced fumble, and 1 fumble recovery in the first half of the game, the junior linebacker is definitely one to watch this season. When asked how he felt about playing so well at the Big House, Moffett said with much enthusiasm, “I think we came out and executed our jobs. We played hard and it paid off.”

The “we” included another junior Justin Thomas, who showed up to perform as well, recovering a Farmington fumble in the first 18 seconds of the game after Moffett stripped the ball from a Farmington player. Walled Lake Western’s starting defense included a band of Warriors collaborating to shut down Farmington’s offense in the first half of the game, preventing them from scoring. Jack Dodge was another multi-talented force to be reckoned with playing offense and defense.

Dodge scored a touchdown in the first half of the game and was an aggressive defensive opponent for Farmington. Josh Johnson was also a formative opponent at last night’s game at The Big House. The collective efforts of Walled Lake Western’s defense compliments their powerhouse offense. Walled Lake Western were the victors with a final score of 41-14.